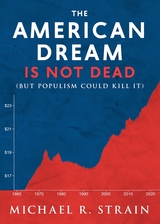 Populists on both sides of the political aisle routinely announce that the American Dream is dead. According to them, the game has been rigged by elites, workers can’t get ahead, wages have been stagnant for decades, and the middle class is dying.

Michael R. Strain, director of economic policy studies at the American Enterprise Institute, disputes this rhetoric as both wrong and dangerous. In this succinctly argued volume, he shows that, on measures of economic opportunity and quality of life, there has never been a better time to be alive in America. He backs his argument with overwhelming—and underreported—data to show how the facts favor realistic optimism.

He warns, however, that the false prophets of populism pose a serious danger to our current and future prosperity. Their policies would leave workers worse off. And their erroneous claim that the American Dream is dead could discourage people from taking advantage of real opportunities to better their lives. If enough people start to believe the Dream is dead, they could, in effect, kill it. To prevent this self-fulfilling prophecy, Strain’s book is urgent reading for anyone feeling the pull of the populists.

AUTHOR BIOGRAPHY
Michael R. Strain is Director of Economic Policy Studies and Arthur F. Burns Scholar in Political Economy at the American Enterprise Institute (AEI). An economist, his research has been published in academic and policy journals and he has edited two books on economics and public policy. He is a research fellow at the Institute of Labor Economics (IZA) in Bonn, Germany, writes regularly for popular audiences, and is a columnist for Bloomberg Opinion. Strain is frequently interviewed by major media outlets, speaks often to a variety of audiences, and has testified before Congress. He holds a PhD in economics from Cornell University and lives in Washington, DC.
TABLE OF CONTENTS
Cover
Title
Copyright
Contents
Introduction
PART 1: The American Dream Is Not Dead
1. Defining the Dream
2. Today’s Message: The Dream Is Dead
3. We Have Real Challenges
4. The American Dream Is Not Dead
5. Today’s Economy Is Delivering
6. Incomes Are Growing
7. Quality of Life Has Clearly Improved
8. “Hollowing Out” Won’t Be the End of the Story
9. America Is an Upwardly Mobile Society
10. Advancing the Dream
PART 2: Dissenting Points of View
11. Populism Isn’t the Problem: It’s a Response to Inequality
12. Why Economic Trends Support Conservative Populism
13. A Response to E. J. Dionne and Henry Olsen
Acknowledgments
Notes
About the Contributors
About the Author
REQUEST ACCESSIBLE FILE