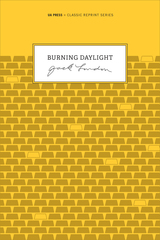 In Jack London’s lifetime, Burning Daylight was one of his best-selling books, yet it has been largely out of print for decades. Now the novel is being brought back for a new generation of readers to discover.

The story features one of London’s most engaging larger-than-life protagonists, Elam Harnish, a prospector with John Henry–like strength and a thirst for gold-plated wealth. Harnish, the “Burning Daylight” of the title, eventually strikes it rich through his talent in the mines—and at the poker table. But he ultimately makes the biggest gamble of his life when he decides to trade it all for the golden-haired love of his life.

While the novel moves from Alaska to the Sonoma Valley and later into the wilds of Wall Street, it’s the vivid descriptions of the Gold Rush–era Klondike that shine. London takes readers on journeys deep into mines and across the frozen North via sled dog. He captures the competitive spirit of the time and the endless hope that the big score is just one dig away. London weaves in progressive views on sustainability and land use, and also timeless lessons about the real riches in life.

This new edition presents London’s text in full and features a new afterword from University of Alaska Fairbanks professor Eric Heyne. Heyne situates the novel within London’s life and writings and looks at some of the sources that may have inspired him. The re-emergence of Burning Daylight will allow London’s fans to fill in an important spot on their bookshelf and rediscover a long–lost work.
AUTHOR BIOGRAPHY
Jack London (1876–1916) was a world-famous author, journalist, and activist. His books include The Call of the Wild and White Fang.Eric Heyne is professor of English at the University of Alaska Fairbanks. He is the editor of Desert, Garden, Margin, Range: Literature on the American Frontier.
TABLE OF CONTENTS
Copyright Page
Part I
Part II