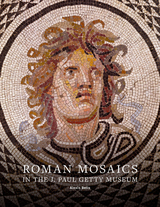 The mosaics in the collection of the J. Paul Getty Museum span the second through the sixth centuries AD and reveal the diversity of compositions found throughout the Roman Empire during this period. Elaborate floors of stone and glass tesserae transformed private dwellings and public buildings alike into spectacular settings of vibrant color, figural imagery, and geometric design. Scenes from mythology, nature, daily life, and spectacles in the arena enlivened interior spaces and reflected the cultural ambitions of wealthy patrons. This online catalogue documents all of the mosaics in the Getty Museum’s collection, presenting their artistry in new color photography as well as the contexts of their discovery and excavation across Rome's expanding empire—from its center in Italy to provinces in southern Gaul, North Africa, and ancient Syria.

Reflecting the Getty's commitment to open content, Roman Mosaics in the J. Paul Getty Museum is available online at www.getty.edu/publications/romanmosaics and may be downloaded free of charge in multiple formats. For readers who wish to have a bound reference copy, this paperback edition has been made available for sale.

The publication of this online catalogue is issued on the occasion of the exhibition, Roman Mosaics across the Empire, on view at the Getty Villa from March 30 through September 12, 2016.

Alexis Belis is assistant curator of antiquities at the J. Paul Getty Museum. Christine Kondoleon is George D. and Margo Behrakis Curator of Greek and Roman Art at the Museum of Fine Arts, Boston.