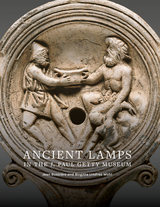 In the collection of the J. Paul Getty Museum are more than six hundred ancient lamps that span the sixth century BCE to the seventh century CE, most from the Roman Imperial period and largely created in Asia Minor or North Africa. These lamps have much to reveal about life, religion, pottery, and trade in the ancient Graeco-Roman world. Most of the Museum’s lamps have never before been published, and this extensive typological catalogue will thus be an invaluable scholarly resource for art historians, archaeologists, and those interested in the ancient world.

Reflecting the Getty's commitment to open content, Ancient Lamps in the J. Paul Getty Museum is available online at http://www.getty.edu/publications/ancientlamps and may be downloaded free of charge in multiple formats, including PDF, MOBI/Kindle, and EPUB, and features zoomable images and multiple views of every lamp, an interactive map drawn from the Ancient World Mapping Center, and bibliographic references.
For readers who wish to have a bound reference copy, this paperback edition has been made available for sale.