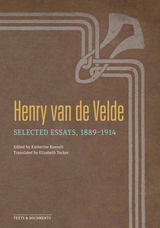 The first English collection of writings by Henry van de Velde, one of the most influential designers and theorists of the twentieth century.

Belgian artist, architect, designer, and theorist Henry van de Velde (1863–1957) was a highly original and influential figure in Europe beginning in the 1890s. A founding member of the Art Nouveau and Jugendstil movements, he also directed the Grand-Ducal Saxon School of Arts and Crafts in Weimar, Germany, which eventually became the Bauhaus under Walter Gropius.

This selection of twenty-six essays, translated from French and German, includes van de Velde’s writings on William Morris and the English Arts and Crafts movement, Neo-Impressionist painting, and relationships between ornament, line, and abstraction in German aesthetics. The texts trace the evolution of van de Velde’s thoughts during his most productive period as a theorist in the artistic debates in France, Germany, Belgium, and the Netherlands. Katherine M. Kuenzli expertly guides readers to see how van de Velde’s writings reconcile themes of aesthetics and function, and expression and reason, throughout the artistic periods and regions represented by these texts. With introductory discussions of each essay and full annotations, this is an essential volume for a broad range of scholars and students of the history of fine and applied arts and ideas.
AUTHOR BIOGRAPHY
Katherine M. Kuenzli is professor of art history at Wesleyan University. Her many publications include the books Henry van de Velde: Designing Modernism (2019) and The Nabis and Intimate Modernism: Painting and the Decorative at the Fin-de-Siècle (2010).

Elizabeth Tucker is a translator and editor of scholarly works in art and architectural history.
REVIEWS

“A key figure of late nineteenth- and twentieth-century architecture and design, Henry van de Velde’s seminal role and thought has yet to emerge fully from under the shadow, notably, of those who continued his work in Weimar with the creation of the Bauhaus. This volume is a triumph of textual sleuthing, providing a generous selection of van de Velde’s writings that allows scholars and students alike to witness the many facets of this cosmopolitan designer’s interaction with turn-of-the-century reform movements in Belgium, Germany, and France. A figure long reduced to a small set of designs in survey books is here revealed in all his complexity and even contradictions.”

"Writing and speaking fueled the modernist persona and the international career of designer Henry van de Velde. This volume, an essential companion to the existing literature, makes a case for why—and how—he emerged as one of the most significant, and difficult, figures of the twentieth century."
—Amy F. Ogata, Professor of Art History, University of Southern California