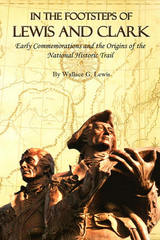 Although it was 1806 when Lewis and Clark returned to St. Louis after their journey across the country, it was not until 1905 that they were celebrated as national heroes. In the Footsteps of Lewis and Clark examines how public attitudes toward their explorations and the means of commemorating them have changed, from the production of the Lewis and Clark Exposition in 1905 to the establishment of the Lewis and Clark National Historic Trail in 1978 and the celebrations of the expedition's bicentennial from 2003 through 2007.

The first significant stirrings of national public interest in Lewis and Clark coincided with the beginning of a nationwide fascination with transcontinental automobile touring. Americans began to reconnect with the past and interact with the history of Western expansion by becoming a new breed of "frontier explorer" via their cars. As a result, early emphasis on local plaques and monuments yielded to pageants, reenactments, and, ultimately, attempts to retrace the route, promoting conservation and recreation along its length.

Wallace G. Lewis details the ingenuity that inspired the establishment of the Lewis and Clark National Historic Trail, opening a window to how America reimagines, recreates, and remembers its own past. In the Footsteps of Lewis and Clark will appeal to both scholarly and armchair historians interested in the Western frontier as experienced by both Lewis and Clark and those retracing their steps today.