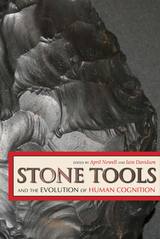 Stone tools are the most durable and common type of archaeological remain and one of the most important sources of information about behaviors of early hominins. Stone Tools and the Evolution of Human Cognition develops methods for examining questions of cognition, demonstrating the progression of mental capabilities from early hominins to modern humans through the archaeological record.

Dating as far back as 2.5-2.7 million years ago, stone tools were used in cutting up animals, woodworking, and preparing vegetable matter. Today, lithic remains give archaeologists insight into the forethought, planning, and enhanced working memory of our early ancestors. Contributors focus on multiple ways in which archaeologists can investigate the relationship between tools and the evolving human mind-including joint attention, pattern recognition, memory usage, and the emergence of language.

Offering a wide range of approaches and diversity of place and time, the chapters address issues such as skill, social learning, technique, language, and cognition based on lithic technology. Stone Tools and the Evolution of Human Cognition will be of interest to Paleolithic archaeologists and paleoanthropologists interested in stone tool technology and cognitive evolution.


Iain Davidson is Emeritus Professor of Archaeology at the University of New England, New South Wales, Australia.
TABLE OF CONTENTS
Contents
1: Introduction and Overview
2: “Grammars of Action” and Stone Flaking Design Space
3: Insights on the Technical Competence of the Early Oldowan
4: Growing Up in the Middle Pleistocene
5: How Levallois Reduction Is Similar to, and Not Similar to, Playing Chess
6: On Standardization in the Paleolithic
7: Middle Stone Age Stone Tools from Klasies River Main Site and Symbolic Cognition
8: Possible Relations between Language and Technology in Human Evolution
9: Stone Tools and the Evolution of Hominin and Human Cognition
10: Current Developments in Inferring Cognitive Capabilities from the Archaeological Traces Left by Stone Tools
Contributors
Index
REQUEST ACCESSIBLE FILE