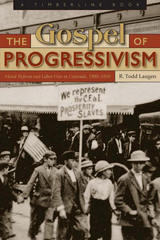 Chronicling the negotiations of Progressive groups and the obstacles that constrained them, The Gospel of Progressivism details the fight against corporate and political corruption in Colorado during the early twentieth century. While the various groups differed in their specific agendas, Protestant reformers, labor organizers, activist women, and mediation experts struggled to defend the public against special-interest groups and their stranglehold on Colorado politics.

Sharing enemies like the party boss and corporate lobbyist who undermined honest and responsive government, Progressive leaders were determined to root out selfish political action with public exposure. Labor unions defied bosses and rallied for government protection of workers. Women's clubs appealed to other women as mothers, calling for social welfare, economic justice, and government responsiveness. Protestant church congregations formed a core of support for moral reform. Labor relations experts struggled to prevent the outbreak of violence through mediation between corporate employers and organized labor. Persevering through World War I, Colorado reformers faced their greatest challenge in the 1920s, when leaders of the Ku Klux Klan drew upon the rhetoric of Protestant Progressives and manipulated reform tools to strengthen their own political machine. Once in power, Klan legislators turned on Progressive leaders in the state government.

A story of promising alliances never fully realized, zealous crusaders who resisted compromise, and reforms with unexpected consequences, The Gospel of Progressivism will appeal to those interested in Progressive Era reform, Colorado history, labor relations, and women's activism.

AUTHOR BIOGRAPHY
Todd Laugen is an assistant professor of history at the Metropolitan State College of Denver.
TABLE OF CONTENTS
Contents
Illustrations
Acknowledgements
Foreword
Intro: The Varieties of Colorado Progressivism
1: Protestant Progressives and the Denver Party Machine
2: Public Enemy: Colorado Fuel and Iron or the Saloon?
3: The Denver Tramway Crisis and the Struggle for Masculine Citizenship
4: The Consuming Public and the Industrial Commission
5: Ben Lindsey and Women Progressives
6: The Colorado Klan and the Decline of Progressivism
Epilogue: The Progressive Legacy
Notes
Index
REQUEST ACCESSIBLE FILE