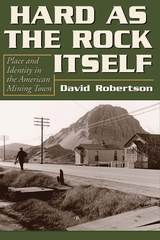 The first intensive analysis of sense of place in American mining towns, Hard as the Rock Itself: Place and Identity in the American Mining Town provides rare insight into the struggles and rewards of life in these communities. David Robertson contends that these communities - often characterized in scholarly and literary works as derelict, as sources of debasing moral influence, and as scenes of environmental decay - have a strong and enduring sense of place and have even embraced some of the signs of so-called dereliction.

Robertson documents the history of Toluca, Illinois; Cokedale, Colorado; and Picher, Oklahoma, from the mineral discovery phase through mine closure, telling for the first time how these century-old mining towns have survived and how sense of place has played a vital role.

Acknowledging the hardships that mining's social, environmental, and economic legacies have created for current residents, Robertson argues that the industry's influences also have contributed to the creation of strong, cohesive communities in which residents have always identified with the severe landscape and challenging, but rewarding way of life.

Robertson contends that the tough, unpretentious appearance of mining landscapes mirrors qualities that residents value in themselves, confirming that a strong sense of place in mining regions, as elsewhere, is not necessarily wedded to an attractive aesthetic or even to a thriving economy.

Mining historians, geographers, and other students of place in the American landscape will find fascinating material in Hard As the Rock Itself.
AUTHOR BIOGRAPHY
David Robertson is an assistant professor of geography at the State University of New York at Geneseo.
TABLE OF CONTENTS