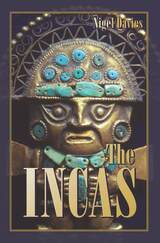 The Inca Empire's immense territory spanned more than 2,000 miles - from Ecuador to Chile - at the time of the Spanish invasion, yet Inca culture remains largely a mystery. The Incas did not leave pictorial codices and documents in their native language as the Maya and Aztec did and they narrated to Spanish chroniclers just a few of the multiple alternative histories maintained by descendants of various rulers.

In this classic work, Nigel Davies offers a clear view into Inca political history, economy, governance, religion, art, architecture, and daily life. The Incas has become a classic in its many years in print; readers and scholars interested in ancient American cultures will relish this paperback edition.
AUTHOR BIOGRAPHY
Archaeologist Nigel Davies, Ph.D., has written extensively on the Aztecs and Toltecs, on the origins of the peoples of the New World, including the books The Ancient Kingdoms of Mexico, The Ancient Kingdoms of Peru, The Toltecs, and The Aztecs, and on religious practices throughout America. He has lectured on archaeology at Harvard, Yale, and UCLA.
TABLE OF CONTENTS
Contents
Maps
Prologue
1. In Search of the Past
2. The First of the Incas
3. The Era of Pachacutec
4. The Last Conquerors
5. The Inca State
6. The Empire and Its Infrastructure
7. The Imperial System
8. The Decline and Fall
Appendix A
Notes
Bibliography
Index
REQUEST ACCESSIBLE FILE