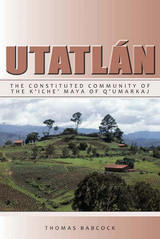 One of the most important Postclassic cities, Utatlán, in highland Guatemala, was excavated more than three decades ago. However, the data amassed by archaeologists have not been published until now. Details on architecture, pottery, burials, and artifacts, along with a focus on residential archaeology, make Utatlán: The Constituted Community of the K'iche' Maya of Q'umarkaj a significant contribution to Maya archaeology.

Most information available on Utatlán focuses on the ceremonial center and ignores the city of the commoners. Using the archaeological data, Utatlán attempts to determine the boundaries of the community and to characterize subdivisions within it. Evidence of indigenous nonelite houses, rich burials, and grave goods unlike those found in contemporary sites reveals information about the supporting residence zone. In addition, Babcock applies the concept of "constituted community," interpreting the archaeological data from a prehistoric context, and proposes a theoretical framework for interpreting prehistoric sites with respect to urbanism and political complexity.

Utatlán: The Constituted Community of the K'iche' Maya of Q'umarkaj will be of interest to students and scholars of Mesoamerican anthropology, archaeology, and ethnohistory.