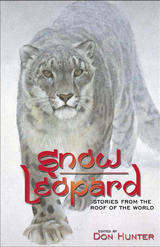 "Just recently, we once again traveled the high roads of snow leopard country, enjoying the beauty of Ladakh's iconic monasteries and watching blue sheep graze steep mountainsides. We saw no snow leopards but sensed their presence, feeling lucky and thrilled to be under the distant gaze of this magnificent cat. May you experience a similar feeling as you read about the snow leopard in this remarkable collection."
-Robert Bateman, from the foreword.

Like no other large cat, the snow leopard evokes a sense of myth and mysticism, strength and spirit shrouded in a snowy veil, seldom seen but always present. Giving a voice to the snow leopard, this collection of powerful first person accounts from an impressive cadre of scientist-adventurers grants readers a rare glimpse of this elusive cat and the remarkable lives of those personally connected to its future. These Stories from the Roof of the World resonate with adventure, danger, discovery, and most importantly hope for this magnificent big cat.

AUTHOR BIOGRAPHY
Don Hunter was drawn into the snow leopard's world more than twenty years ago while working as aresearch ecologist with the US Department of the Interior. His experience with snow leopards in centralAsia led to similar studies of mountain lions in Colorado's Rocky Mountains. He still works on behalf ofbig cats worldwide as science director for the Rocky Mountain Cat Conservancy (catconservancy.org).
TABLE OF CONTENTS
Cover
Contents
Foreword: Out of White
Preface
Acknowledgments
Introduction: Giving Voice to the Snow Leopard
1. On Meeting a Snow Leopard
2. Face-to-Face with Shan
3. Tracks of My Soul
4. Kashmir
5. From Rice Fields to Snowfields
6. Death of a Bharal
7. An Accord of Hope
8. Tears of the Karakorum
9. The Pelt Smuggler
10. Two Snow Leopards, My Father, and Me
11. Happy Days
12. Raising Sheru
13. Cubs
14. Epiphany
15. Pangje
Color Photos
16. November 13
17. Winter at Chörten Nyima
18. The Spirit of Baga Bogd
19. Gobi Magic
20. Legends of Zanskar
21. Magic Valley
Organizations and Related Websites
Further Reading
Biographical Notes
Illustration Credits
REQUEST ACCESSIBLE FILE