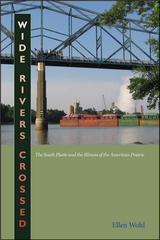 In Wide Rivers Crossed, Ellen Wohl tells the stories of two rivers—the South Platte on the western plains and the Illinois on the eastern—to represent the environmental history and historical transformation of major rivers across the American prairie. Wohl begins with the rivers’ natural histories, including their geologic history, physical characteristics, ecological communities, and earliest human impacts, and follows a downstream and historical progression from the use of the rivers’ resources by European immigrants through increasing population density of the twentieth century to the present day.
During the past two centuries, these rivers changed dramatically, mostly due to human interaction. Crops replaced native vegetation; excess snowmelt and rainfall carried fertilizers and pesticides into streams; and levees, dams, and drainage altered distribution. These changes cascaded through networks, starting in small headwater tributaries, and reduced the ability of rivers to supply the clean water, fertile soil, and natural habitats they had provided for centuries. Understanding how these rivers, and rivers in general, function and how these functions have been altered over time will allow us to find innovative approaches to restoring river ecosystems.

The environmental changes in the South Platte and the Illinois reflect the relentless efforts by humans to control the distribution of water: to enhance surface water in the arid western prairie and to limit the spread of floods and drain the wetlands along the rivers in the water-abundant east. Wide Rivers Crossed looks at these historical changes and discusses opportunities for much-needed protection and restoration for the future.