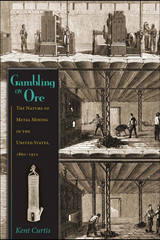 Gambling on Ore examines the development of the western mining industry from the tumultuous and violent Gold Rush to the elevation of large-scale copper mining in the early twentieth century, using Montana as representative of mining developments in the broader US mining west. Employing abundant new historical evidence in key primary and secondary sources, Curtis tells the story of the inescapable relationship of mining to nature in the modern world as the United States moved from a primarily agricultural society to a mining nation in the second half of the nineteenth century.

In Montana, legal issues and politics—such as unexpected consequences of federal mining law and the electrification of the United States—further complicated the mining industry’s already complex relationship to geology, while government policy, legal frameworks, dominant understandings of nature, and the exigencies of profit and production drove the industry in momentous and surprising directions. Despite its many uncertainties, mining became an important part of American culture and daily life.

Gambling on Ore unpacks the tangled relationships between mining and the natural world that gave material possibility to the age of electricity. Metal mining has had a profound influence on the human ecology and the social relationships of North America through the twentieth century and throughout the world after World War II. Understanding how we forged these relationships is central to understanding the environmental history of the United States after 1850.
AUTHOR BIOGRAPHY
Kent "Kip" Curtisis associate professor of Environmental History at The Ohio State University.http://history.osu.edu/directory/curtis457
TABLE OF CONTENTS
Cover
Contents
Figures
Preface and Acknowledgments
Introduction: Arsenic in the Wilderness, or Knowing Nature through Mining
1: Producing a Mining Landscape
2: The Value of Ores
3: Turning Copper into Gold
4: The Ecology of Ore Processing
Conculsion: Producing a Mining Society
Bibliography
Index
REQUEST ACCESSIBLE FILE