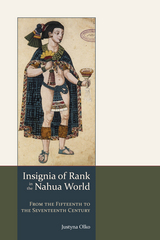 This significant work reconstructs the repertory of insignia of rank and the contexts and symbolic meanings of their use, along with their original terminology, among the Nahuatl-speaking communities of Mesoamerica from the fifteenth through the seventeenth centuries. Attributes of rank carried profound symbolic meaning, encoding subtle messages about political and social status, ethnic and gender identity, regional origin, individual and community history, and claims to privilege.

Olko engages with and builds upon extensive worldwide scholarship and skillfully illuminates this complex topic, creating a vital contribution to the fields of pre-Columbian and colonial Mexican studies. It is the first book to integrate pre- and post-contact perspectives, uniting concepts and epochs usually studied separately. A wealth of illustrations accompanies the contextual analysis and provides essential depth to this critical work. Insignia of Rank in the Nahua World substantially expands and elaborates on the themes of Olko's Turquoise Diadems and Staffs of Office, originally published in Poland and never released in North America.

AUTHOR BIOGRAPHY
Justyna Olko is a professor in the Faculty of "Artes Liberales" at the University of Warsaw. She leads Europe and America in Contact, an international team project funded by the European Research Council and focusing on the cross-cultural transfer manifest in Nahua language and culture. She is also involved in an international program centered on the revitalization of Nahuatl and other endangered languages.
TABLE OF CONTENTS
Cover
Contents
Figures
Preface
1. Introduction
2. The Repertory of Elite Apparel and Insignia of Rank
3. Images of Rank by Region
4. Functions and Meanings of Precontact Costume and Status Items
5. Postcontact Survivals and Adaptations
6. Summation
Appendix: Dictionary of Insignia and Accouterments
References
Index
REQUEST ACCESSIBLE FILE