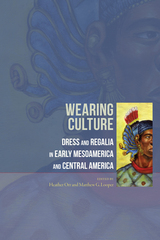 Wearing Culture connects scholars of divergent geographical areas and academic fields—from archaeologists and anthropologists to art historians—to show the significance of articles of regalia and of dressing and ornamenting people and objects among the Formative period cultures of ancient Mesoamerica and Central America.

Focusing on an important period of cultural and artistic development through the lens of costuming and adornment, Wearing Culture will be of interest to scholars of pre-Hispanic and pre-Columbian studies.

AUTHOR BIOGRAPHY
Heather Orr is chair and professor of art history in the Department of Art at Western State Colorado University. Matthew Looper is professor of art history in the Department of Art and Art History at California State University, Chico.
TABLE OF CONTENTS
Contents
Figures
Tables
Preface
Acknowledgments
1: The Sitio Conte Cemetery in Ancient Panama
2: Barely There but Still Transcendent
3: Ties That Bind
4: The Naked and the Ornamented
5: Aspects of Dress and Ornamentation in Coastal Oaxaca’s Formative Period
6: Dressed Ears as Comeliness and Godliness
7: Unsexed Images, Gender-Neutral Costume, and Gender-Ambiguous Costume in Formative Period Gulf Coast Cultures
8: More Than Skin Deep
9: Making the Body Up and Over
10: Framed
11: Wrapped in the Clothing of the Sacred
12: The Symbolic Vocabulary of Cloth and Garments in the San Bartolo Murals
13: Early Maya Dress and Adornment
14: Conclusion
Index
REQUEST ACCESSIBLE FILE