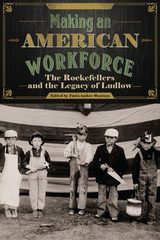 Taking an interdisciplinary approach to the policies of the early years of the Colorado Fuel and Iron Company, Making an American Workforce explores John D. Rockefeller Jr.'s welfare capitalist programs and their effects on the company's diverse workforce.

Focusing on the workers themselves—men, women, and children representative of a variety of immigrant and ethnic groups—contributors trace the emergence of the Employee Representation Plan, the work of the company's Sociology Department, and CF&I's interactions with the YMCA in the early twentieth century. They examine CF&I's early commitment to Americanize its immigrant employees and shape worker behavior, the development of policies that constructed the workforce it envisioned while simultaneously laying the groundwork for the strike that eventually led to the Ludlow Massacre, and the impact of the massacre on the employees, the company, and beyond.