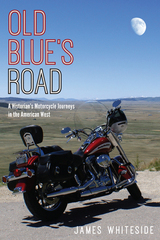 In Old Blue’s Road, historian James Whiteside shares accounts of his motorcycle adventures across the American West. He details the places he has seen, the people he has met, and the personal musings those encounters prompted on his unique journeys of discovery.

In 2005, Whiteside bought a Harley Davidson Heritage Softail, christened it “Old Blue,” and set off on a series of far-reaching motorcycle adventures. Over six years he traveled more than 15,000 miles. Part travelogue and part historical tour, this book takes the reader along for the ride.  Whiteside’s travels to the Pacific Northwest, Yellowstone, Dodge City, Santa Fe, Wounded Knee, and many other locales prompt consideration of myriad topics—the ongoing struggle between Indian and mainstream American culture, the meaning of community, the sustainability of the West's hydraulic society, the creation of the national parks system, the Mormon experience in Utah, the internment of Japanese Americans during World War II, and more.

Delightfully funny and insightful, Old Blue’s Road links the colorful history and vibrant present from Whiteside’s unique vantage point, recognizing and reflecting on the processes of change that made the West what it is today. The book will interest the general reader and western historian alike, leading to new appreciation for the complex ways in which the American West's past and present come together.

AUTHOR BIOGRAPHY
A native of the American West, James Whiteside is a retired history professor living in Denver. He is the author of two previous books on the West, was awarded the Colorado Historical Society's Leroy R. Hafen Award (1985) and the Colorado Endowment for the Humanities Publication Prize (1999), and was twice a finalist for the Colorado Book Award (2000, 2016).
TABLE OF CONTENTS
Cover
Contents
Acknowledgments
Introduction: Old Blue, the West, and Me
1. Family Reunion
2. The Great Basin
3. Four Trails, Two Rivers
4. Four Corners
5. The Warrior Trail: Triumph
6. The Warrior Trail: Catastrophe
Conclusion: Don’t Fence Me In
Index
REQUEST ACCESSIBLE FILE