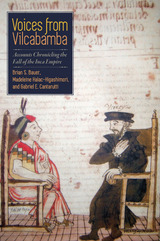 A rich new source of important archival information, Voices from Vilcabamba examines the fall of the Inca Empire in unprecedented detail. Containing English translations of seven major documents from the Vilcabamba era (1536–1572), this volume presents an overview of the major events that occurred in the Vilcabamba region of Peru during the final decades of Inca rule.

Brian S. Bauer, Madeleine Halac-Higashimori, and Gabriel E. Cantarutti have translated and analyzed seven documents, most notably Description of Vilcabamba by Baltasar de Ocampo Conejeros and a selection from Martín de Murúa’s General History of Peru, which focuses on the fall of Vilcabamba. Additional documents from a range of sources that include Augustinian investigations, battlefield reports, and critical eyewitness accounts are translated into English for the first time.

With a critical introduction on the history of the region during the Spanish Conquest and introductions to each of the translated documents, the volume provides an enhanced narrative on the nature of European-American relations during this time of important cultural transformation.

Brian S. Bauer is professor of anthropology at the University of Illinois at Chicago and an adjutant curator at the Field Museum. He has published more than a dozen books on Andean prehistory and is particularly well known for his work on the Incas.

Madeleine Halac-Higashimori is a PhD candidate at the University of Illinois at Chicago.

Gabriel E. Cantarutti is a PhD candidate at the University of Illinois at Chicago.