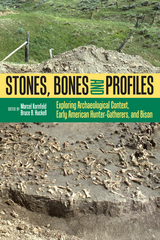 Stones, Bones, and Profiles addresses key and cutting-edge research of three pillars of hunter-gatherer archaeology. Stones and bones—flaked stone tools and the bones of the prey animals—are the objects most commonly recovered from hunter-gatherer archaeological sites, and profiles represent the geologic context of the archeological record. Together they constitute the foundations of much of early archaeology, from the appearance of the earliest humans to the advent of the Neolithic.

The volume is divided into three sections: Peopling of North America and Paleoindians, Geoarchaeology, and Bison Bone Bed Studies. The first section dissects established theories about the Paleoindians, including the possibility that human populations were in North America before Clovis and the timing of the opening of the Alberta Corridor. The second section provides new perspectives on the age and contexts of several well-known New World localities such as the Lindenmeier Folsom and the UP Mammoth sites, as well as a synthesis of the geoarchaeology of the Rocky Mountains' Bighorn region that addresses significant new data and summarizes decades of investigation. The final section, Bison Bone Bed Studies, consists of groundbreaking zooarchaeological studies offering new perspectives on bison taxonomy and procurement.

Stones, Bones, and Profiles presents new data on Paleoindian archaeology and reconsiders previous sites and perspectives, culminating in a thought-provoking and challenging contribution to the ongoing study of Paleoindians around the world.

Marcel Kornfeld is professor of anthropology at the University of Wyoming. He has written ten books and numerous articles about Rocky Mountain and Plains archaeology and prehistory and works closely with avocational archaeologists throughout North America.

Bruce B. Huckell is associate professor of anthropology at the University of New Mexico. He has authored or coedited several publications on latest Pleistocene/earliest Holocene subsistence and settlement strategies as well as the late Holocene arrival of maize agriculture in the Southwest.