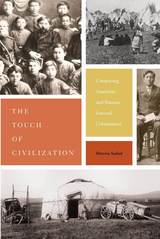 The Touch of Civilization is a comparative history of the United States and Russia during their efforts to colonize and assimilate two indigenous groups of people within their national borders: the Sioux of the Great Plains and the Kazakhs of the Eurasian Steppe. In the revealing juxtaposition of these two cases author Steven Sabol elucidates previously unexplored connections between the state building and colonizing projects these powers pursued in the nineteenth century.

This critical examination of internal colonization—a form of contiguous continental expansion, imperialism, and colonialism that incorporated indigenous lands and peoples—draws a corollary between the westward-moving American pioneer and the eastward-moving Russian peasant. Sabol examines how and why perceptions of the Sioux and Kazakhs as ostensibly uncivilized peoples and the Northern Plains and the Kazakh Steppe as “uninhabited” regions that ought to be settled reinforced American and Russian government sedentarization policies and land allotment programs. In addition, he illustrates how both countries encountered problems and conflicts with local populations while pursuing their national missions of colonization, comparing the various forms of Sioux and Kazakh martial, political, social, and cultural resistance evident throughout the nineteenth century.

Presenting a nuanced, in-depth history and contextualizing US and Russian colonialism in a global framework, The Touch of Civilization will be of significant value to students and scholars of Russian history, American and Native American history, and the history of colonization.
AUTHOR BIOGRAPHY
Steven Sabol is professor of history at the University of North Carolina at Charlotte. He is the former editor of Nationalities Papers and First World War Studies, a recipient of the Arrell M. Gibson Award, and author of Russian Colonization and the Genesis of Kazak National Consciousness.
TABLE OF CONTENTS
Contents
Acknowledgments
Introduction
Chapter One. The Sioux and the Kazakhs
Chapter Two. Pre-Nineteenth-Century Expansion
Chapter Three. Conquest and Martial Resistance
Chapter Four. Through the Colonial Looking-Glass
Chapter Five. Internal Colonization
Chapter Six. Assimilation and Identity
Conclusion
Bibliography
Index
REQUEST ACCESSIBLE FILE