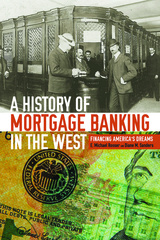 Part economic history, part public history, A History of Mortgage Banking in the West is an insider’s account of how the mortgage banking sector worked over the last 150 years, including analysis of the causes of the 2007 mortgage crisis. Beginning with the land and railroad development acts that encouraged settlement in the west, E. Michael Rosser and Diane M. Sanders trace the laws, institutions, and individuals that contributed to the economic growth of the region.

Using Colorado and the west as a case study for the nation’s economic and property development as a whole since the late nineteenth century, Rosser and Sanders explain how farm mortgages and agricultural lending steadily gave way to urban development and housing mortgages, all while the large mortgage and investment firms financed the development of some of the state’s most important water resources and railroad networks. Rosser uses his personal experience as a lifelong practitioner and educator of mortgage banking, along with a plethora of primary sources, academic archives, and industry publications, to analyze the causes of economic booms and busts as they relate to real estate and development.

Rosser’s professional acumen combined with Sanders’s research experience makes A History of Mortgage Banking in the West a rich and nuanced account of the region’s most significant economic events. It will be an important work for scholars and practitioners in regional and financial history, mortgage market practice and development, government housing and mortgage policy, and financial stability and of great significance to anyone curious about the role of the federal government in national housing policy and the inherent risk in mortgages.

Diane M. Sanders has a BA and MA in history from Colorado State University, where she won the Meyer Nathan Memorial Award for compassion and service. Focused on preservation and cultural resource management under the guidance of the Public Lands History Center, she researched and wrote a historic furnishings report of the Murie Ranch in Grand Teton National Park for the National Park Service.

REVIEWS
“A practitioner’s experience and observations are invaluable complements to academic treatments of an industry, and these authors bring an unusual breadth of on-the-ground knowledge about how the mortgage banking sector works, how it has sometimes failed, and the difference it has made in the development of the economy of Colorado over the past century.”
—Kenneth Snowden, University of North Carolina, Greensboro

“This book should be read by politicians and business leaders everywhere, especially in Colorado and Kansas.”
—Ronnie Phillips, Colorado State University

“Industry professionals and students alike will find this book to be a useful guide to the myriad ways that mortgage bankers have financed the nation.”
—Western Historical Quarterly


“For the mortgage-industry wonk or historian with some curiosity about the subject, the occasional dip will be rewarding. Such industry perspectives are an important part of our history, and this one deserves a valued place on library shelves.”
—Journal of Arizona History


“Rosser and Sanders have done a detailed and authoritative job. This is a good look at an oft-ignored part of our society.”
—The Denver Westerners Roundup Bookshelf