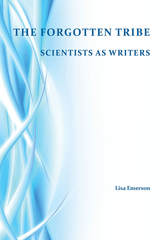 In The Forgotten Tribe: Scientists as Writers, Lisa Emerson offers an important corrective to the view that scientists are "poor writers, unnecessarily opaque, not interested in writing, and in need of remediation." She argues that scientists are among "the most sophisticated and flexible writers in the academy, often writing for a wider range of audiences (their immediate disciplinary peers, peers in adjacent fields, a broad scientific audience, industry, and a range of public audiences including social media) than most other faculty." Moreover, she notes, the often collaborative and multidisciplinary nature of their work results in writing practices that "may be more socially complex, and require more articulation, mediation, and interpersonal communication, and more use of advanced media and technology than those of faculty in other disciplines."

Drawing on extensive interviews with scientists, Emerson argues that writing scholars have "engaged in a form of cultural appropriation" that has worked against a deeper understanding of the contexts in which scientists work and the considerations they bring to their writing. Emerson grounds her analysis in the voices of scientists in a way that allows us to understand not only how they approach writing but also how we might usefully teach writing in the sciences. The Forgotten Tribe offers a valuable contribution to our understanding of scientific writing, allowing us to hear voices that are seldom included in our discussions of this critical area.

AUTHOR BIOGRAPHY
Lisa Emerson is Associate Professor in the School of English and Media Studies at Massey University. Her scholarly interests include science writing, scientists as writers, academic writing, plagiarism, and transitions to academic literacy. Her work has appeared in Double Helix, Curriculum Matters, and Higher Education Research and Development as well as in edited collections.
REQUEST ACCESSIBLE FILE