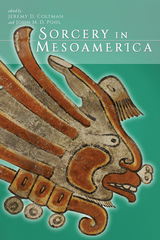 Approaching sorcery as highly rational and rooted in significant social and cultural values, Sorcery in Mesoamerica examines and reconstructs the original indigenous logic behind it, analyzing manifestations from the Classic Maya to the ethnographic present. While the topic of sorcery and witchcraft in anthropology is well developed in other areas of the world, it has received little academic attention in Mexico and Central America until now.

In each chapter, preeminent scholars of ritual and belief ask very different questions about what exactly sorcery is in Mesoamerica. Contributors consider linguistic and visual aspects of sorcery and witchcraft, such as the terminology in Aztec semantics and dictionaries of the Kaqchiquel and K’iche’ Maya. Others explore the practice of sorcery and witchcraft, including the incorporation by indigenous sorcerers in the Mexican highlands of European perspectives and practices into their belief system. Contributors also examine specific deities, entities, and phenomena, such as the pantheistic Nahua spirit entities called forth to assist healers and rain makers, the categorization of Classic Maya Wahy (“co-essence”) beings, the cult of the Aztec goddess Cihuacoatl, and the recurring relationship between female genitalia and the magical conjuring of a centipede throughout Mesoamerica.

Placing the Mesoamerican people in a human context—as engaged in a rational and logical system of behavior—Sorcery inMesoamerica is the first comprehensive study of the subject and an invaluable resource for students and scholars of Mesoamerican culture and religion.

John M. D. Pohl is adjunct professor in art history at UCLA and lecturer in anthropology at Cal State LA. A specialist in ancient Mesoamerican art and writing systems, he has published numerous books and articles including Exploring Mesoamerica and The Legend of Lord Eight Deer. In addition to his academic pursuits, Pohl has served as a writer, designer, and curator for major museums and exhibitions including “Sorcerers of the Fifth Heaven: Art and Ritual in Ancient Southern Mexico” for Princeton University, “The Aztec Pantheon and the Art of Empire” for the Getty Villa Museum, and “The Children of Plumed Serpent: The Legacy of Quetzalcoatl in Ancient Mexico” for the Los Angeles County Museum of Art.