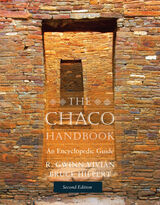 Chaco Canyon in northwestern New Mexico contains a remarkable set of Ancestral Puebloan buildings. Occupied between AD 850 and 1150, Chaco appears to have been the cultural and political center for much of what is now the Four Corners region. Many sites in the Chaco Culture National Historical Park have been continuously studied for more than a century. Vivian and Hilpert wrote this encyclopedic handbook to help organize the extensive amount of information available for Chaco, as well as to stimulate speculation and encourage further exploration. The result is a highly accessible but thorough reference.

The Chaco Handbook includes more than 270 cross-referenced, alphabetical entries, more than 100 illustrations and maps, plus histories of Chaco’s development and ensuing archaeological research. Entries address important Chacoan and related sites, place-names, archaeological and ethnographic terms, objects and architectural features, and institutions and individuals. This second edition includes a new preface, a new chapter on professional explanations for the “Chaco Phenomena,” additional entries, and revisions to existing entries. Useful to anyone with an interest in the Ancestral Puebloans, including specialists, this handbook will guide readers to greater exploration of Chacoan culture and the Chaco world.

R. Gwinn Vivian is former curator of archaeology for the Arizona State Museum at the University of Arizona in Tucson.

Bruce Hilpert is curator of public programs for the Arizona State Museum at the University of Arizona in Tucson.