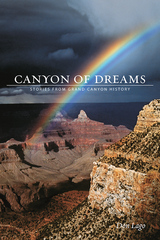 The Grand Canyon—long recognized as one of North America’s premier natural wonders—has stirred human imagination and creativity, leaving an indelible mark on all who have encountered its spectacular vistas and intricate landscapes. Stories of the canyon’s early inhabitants to its modern day visitors are as varied and deep as the canyon’s cliffs.

In 1928 astronomer Edwin Hubble came to the canyon to test it as a site for the world’s greatest observatory. In the 1960s the Apollo astronauts hiked into the canyon to learn geology in preparation for lunar explorations. Famous writers and poets have looked to the canyon to find the meanings of nature and God. Dreamers turned a 1909 newspaper hoax into an elaborate myth about ancient Egyptian tombs in the canyon. Canyon of Dreams tells these and other stories, including that of Brighty the burro, who inspired a classic children’s novel, and the story of a teenaged Roger Miller, who spent a summer living in a trailer and “pushin’ broom” at the canyon, leading to his song “King of the Road.” Newspaper tycoon William Randolph Hearst’s fight against the National Park Service to retain property he owned on the canyon rim is another illuminating tale. Despite being little known in the official annals of Grand Canyon history, the fight served as a pivotal moment in the much broader struggle between promoters of wilderness conquest and those advocating for preservation.
This eclectic compilation runs the gamut from the idiosyncratic to the landmark, the mythical to the empirical, and everything in between. The narratives are captivating and sure to appeal to readers interested in the Grand Canyon’s long and complex history. The work is thoroughly researched and will prove a valuable contribution to historical scholarship. Canyon of Dreams sheds light on many obscure aspects of the canyon and takes readers on rollicking adventures in the process.

AUTHOR BIOGRAPHY
Don Lago has spent twenty-five years exploring the Grand Canyon, having kayaked it six times and backpacked it more than sixty times. He has extensively researched Grand Canyon history and has made archaeological discoveries during his years of backcountry research. Lago is the author of numerous articles and of the bestselling book, Grand Canyon Trivia.
TABLE OF CONTENTS


List of Illustrations
Acknowledgments
Introduction
1. That’s One Small Step. . .in the Grand Canyon: The Apollo Astronauts Hike to the Moon
2. On the Rim of Creation: The World’s Greatest Telescope
3. “Looks Like a Mulhatton Story”: The Origin of the Egyptian Cave Myth
4. Panda Tracks in the Grand Canyon: Tales of the Ancient Chinese
5. The Tail that Wagged the President: Or, President Harding’s Dogged Secretary of the Interior
6. Citizen Kane-yon: William Randolph Hearst’s Grand Canyon Estate
7. Brighty of the Grand Canyon: History Becomes Fiction, and Fiction Makes History
8. King of the Road: Roger Miller’s Big Adventure
9. With God and Teddy at El Tovar: Early Tourists React to the Grand Canyon
10. “These Infinities of Beauty and Terror”: Poets and Writers Discover the Grand Canyon
11. Haunted by Time: British Writers Discover the Grand Canyon
12. Tropic of Canyon: Henry Miller’s Moment of Truth
13. Tall Cliffs and Tall Tales: The Origins of John Hance
14. The Yellow Brick Road: A Personal Reflection on History
Notes
Bibliography
Index