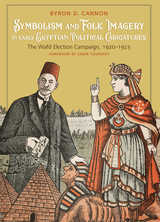 Art is politics and politics is art in this study of post–World War I caricature art in Egypt and Egyptian politics. This book explores the complex meaning and significance of caricature art drawn to support the ascendant Egyptian Wafdpolitical party and its push for independence from British colonial control. The works of previously neglected Egyptian lithographers are also explored, especially those who adopted sophisticated European techniques while experimenting with a variety of new styles during a remarkable period in Egyptian history.

Caricature art by Wafd party artists was almostsui generis. It is distinguished especially by its sincere use of iconic, folkloric imagery, intended to rally nationalistic sentiments among an emerging Egyptian electorate that included many nonliterate citizens. Cannon’s research breathes new life into an influential yet largely forgotten artistic movement in Egypt, one that deserves recognition for its contribution to Egypt’s share of modern Middle East cultural history. Includes full color reproductions.
AUTHOR BIOGRAPHY
Byron D. Cannon is a professor of history emeritus at the University of Utah. He is the author of Politics of Law and the Courts in 19th-Century Egypt (U of U Press, 1988) and editor of Terroirs et Sociétés au Maghreb et au Moyen Orient (University of Lyon II, IRMAC, 1987).
TABLE OF CONTENTS