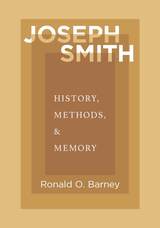 The study of Joseph Smith and his writings have long been shaped by the polemical atmosphere that surrounds Smith’s claims to divine authorship. Even after a half-century of serious scholarship devoted to Smith, fundamental questions remain about how to best interpret features of his life and writing. Smith’s own History of Joseph Smith (edited and revised at the beginning of the twentieth century by B. H. Roberts) created an enduring image that influenced Mormon theology, doctrine, and polity for generations. With new historical documents now available, however, a reappraisal of Smith and the origins of Mormonism is necessary.

Ronald O. Barney, a former editor of the Joseph Smith Papers, applies new interpretations to Smith in history and memory, re-examining both his writings and contemporary accounts of him. The book explores the best methodologies for appraising the historical record, including a review of Smith’s world and its contextual background, an analysis of his foundational experiences, and a characterization of Smith as a man and prophet. Though the premise of re-evaluation may be unsettling to traditionalists, a modern reconsideration of the historical record’s entire range of sources is necessary to fashion a strategy for evaluating Smith and his enduring but complex legacy.
AUTHOR BIOGRAPHY
Ronald O. Barney served for thirty-four years as an archivist and historian in the History Department of the Church of Jesus Christ of Latter-day Saints. He is a former associate editor of the Joseph Smith Papers and creator and executive producer of the Joseph Smith Papers documentary television series. His books include One Side by Himself: The Life and Times of Lewis Barney and The Mormon Vanguard Brigade of 1847: Norton Jacob’s Record.
TABLE OF CONTENTS