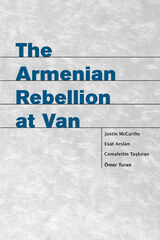 Before World War I, the ancient city of Van in southeastern Anatolia had a population of approximately 100,000 people, while the population of Van Province was about 500,000. Armenians formed a large minority, with Kurdish tribes and Turks in the majority.

The Armenian Rebellion at Van presents a long-overdue examination of Van from the 1870s to 1919. As the authors state, "The Armenian Revolt was an integral part of the great disaster that overcame the people of the Ottoman East. The slaughter of Muslims that accompanied the Armenian revolt in Van Province inexorably led first to Kurdish reprisals on the Armenians, then to a general and mutual massacre of the people of the East."

The actions at Van offer a window into the far-reaching events that soon followed in other parts of Anatolia.

AUTHOR BIOGRAPHY
Justin McCarthy is professor of history and distinguished university scholar at the University of Louisville.
TABLE OF CONTENTS

Appendices
1. Place Names
2. Armenians in the Van Government
3. Armenian Refugees
4. Extract from the “Instructions for Personal Defense” (1910)
5. An Example of Attacks on Villagers
6. The Manifesto of Abdürrezzak
Bibliography
Index