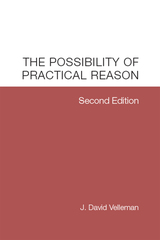 The Possibility of Practical Reason
by J. David Velleman
Michigan Publishing Services
Paper: 978-1-60785-342-8
The Possibility of Practical Reason explores the foundational questions of moral psychology: How can any of our behavior qualify as acting for a reason? How can any considerations qualify as reasons for us to act? David Velleman argues that both possibilities depend on there being a constitutive aim of action?something that makes for success in action as such. These twelve essays?five of which were not included in the previous edition, two of them previously unpublished?discuss topics such as freedom of the will, shared intention, the relation between value and practical reasoning, the foundations of decision theory, and the motivational role of the imagination.