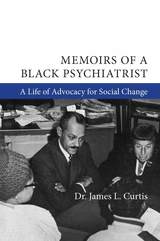 Memoirs of a Black Psychiatrist: A Life of Advocacy for Social Change
by James L. Curtis
Michigan Publishing Services, 2017
eISBN: 978-1-60785-432-6
Paper: 978-1-60785-431-9
Born during the Great Migration, pursuing an education during World War II, and beginning a career during the Civil Rights movement, Dr. James L. Curtis has surmounted many racial hurdles to rise to the top of academic medicine. Memoirs of a Black Psychiatrist tells Dr. Curtis’s story of working toward his life goal of improving the quality of life and full citizenship of his people, with the help of mentors both black and white. He shows that in only a few decades of his life was it possible for his parents—later, for him and other family members, the whole black community, and eventually the world—to step up a little higher, or be forced back again to the back of the bus.

In his two previous books, Dr. Curtis illustrated the leadership role he played in changing how medicine is practiced for the better. His first book, Blacks, Medical Schools and Society (University of Michigan Press, 1971), was written when he was an associate dean of the Cornell University Medical College. As dean in the beginning years of Affirmative Action in Medicine, Dr. Curtis took action in this movement by desegregating medical school admissions not only at Cornell, but also in all US medical schools. After his retirement, his second book, Affirmative Action in Medicine: Improving Health Care for All (University of Michigan Press, 2003), was published: a twenty-five-year progress report on the social benefit of these programs in the American practice of medicine.

Dr. Curtis retired in 2000 as Clinical Professor of Psychiatry of Columbia University College of Physicians and Surgeons, having been a faculty member for eighteen years. During his tenure at Columbia he was also Director of Psychiatry at Harlem Hospital Center, serving one of the most economically deprived neighborhoods of New York City. Since 2003, he has lived in his hometown of Albion, Michigan, one of the formerly vibrant and prosperous cities devastated by the collapse of the automobile industry. With a small group of others, he is developing new social service programs to benefit Albion.