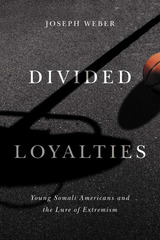 Why do people join violent extremist movements? What attracts so many to fight for terrorist groups like al-Shabab, al-Qaida, and the Islamic State? Journalism professor Joseph Weber answers these questions by examining the case of the more than fifty Somali Americans, mostly young men from Minnesota, who made their way to Somalia or Syria, attempted to get to those countries, aided people who did, or financially backed terrorist groups there. Often defying parents who had fled to the United States seeking safety and prosperity for their children, many of these youths ended up dead, missing, or imprisoned. But for every person who went on or attempted this journey believing they were rising to the defense of Islam, more rejected the temptations of terrorism. What made the difference? The book takes a close look at one man from Minneapolis, the American-born son of a couple who had fled Somalia, who came dangerously close to answering the ISIS call. Abdirahman Abdirashid Bashir’s cousins and friends had taken up arms for the group and reached out to him to join them. From 2014 to 2016 he and a dozen friends—some still in their teens—schemed to find ways to get to Syria. Some succeeded. In the end, Bashir made a different choice. Not only did he reject ISIS’s call, he decided to work with the FBI to spy on his friends and ultimately to testify against them in court. Drawing on extensive interviews, Weber explains why.
AUTHOR BIOGRAPHY
JOSEPH WEBER is the Jerry and Karla Huse Professor of News-Editorial and an Associate Professor of Journalism at the University of Nebraska–Lincoln. Weber worked for thirty-five years in daily and weekly journalism, including twenty-two years in several posts across North America for BusinessWeek, departing as the magazine’s chief of correspondents.
TABLE OF CONTENTS
Contents
Major Figures
Introduction
Chapter 1. The Seeds of Jihad
Chapter 2. A Land of Chaos
Chapter 3. The First Wave
Chapter 4. Blind Devotion
Chapter 5. A Cautionary Tale
Chapter 6. Don’t Let the Caravan Leave You
Chapter 7. Why ISIS?
Chapter 8. A Special Case
Chapter 9. Peer to Peer
Chapter 10. A Woman’s Place?
Chapter 11. Brotherhood
Chapter 12. The Caravan Beckons Again
Chapter 13. The Glory of the Shahid
Chapter 14. Breaking Down
Chapter 15. A Very Real Threat
Chapter 16. Straight Out of Hollywood
Chapter 17. The Backlash
Chapter 18. The Judge
Chapter 19. A Closed World?
Chapter 20. Taking a Hard Look
Chapter 21. Moving On
Acknowledgments
Notes
Selected Bibliography
Index
REQUEST ACCESSIBLE FILE