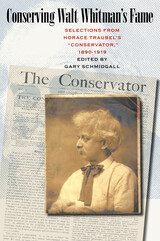 It is now difficult to imagine that, in the years before Whitman's death in 1892, there was real doubt in the minds of Whitman and his literary circle whether Leaves of Grass would achieve lasting fame. Much of the critical commentary in the first decade after his burial in Camden was as negative as that in Boston's Christian Register, which spoke of Whitman as someone who “succeeded in writing a mass of trash without form, rhythm, or vitality.”That the balance finally tipped toward admiration, culminating in Whitman's acceptance into the literary canon, was due substantially to the unflagging labor of Horace Traubel, famous for his nine volumes of Whitman conversations but less well known for his provocative monthly journal of socialist politics and avant-garde culture, the Conservator.Conserving Walt Whitman's Fame offers a generous selection from the enormous trove of Whitman-related materials that Traubel included in the 352 issues of the Conservator. Among the revelatory, perceptive, and often entertaining items presented here are the most illuminating of the Conservator's more than 150 topical essays on Whitman and memoirs by many of his friends and literary cohorts that shed new light on the poet, his work, and his critical reception. Also important is the richer understanding these pages afford of Horace Traubel's own sophisticated, deeply humane, and feisty views of America.
AUTHOR BIOGRAPHY
Gary Schmidgall is a professor of English at Hunter College, the City University of New York, and the editor of Intimate with Walt: Selections from Whitman's Conversations with Horace Traubel, 1888-1892 (Iowa 2001). His other Whitman books are Walt Whitman: A Gay Life and Walt Whitman: Selected Poems 1855--1892. He has also published books on Shakespeare and on the relation between literature and opera as well as a biography of Oscar Wilde.
REVIEWS

“In Gary Schmidgall's illuminating collection, we see more clearly than ever before Horace Traubel's vital role in shaping Whitman's reputation. As we read these selections, we witness Whitman move from the cultural periphery to the center, becoming a vital resource to modernists and serving as a touchstone for working-class and radical political activists. It was in the Conservator that many of the issues that continue to influence our interpretation of the poet were first framed. Schmidgall's perceptive introduction and careful selection of materials will enrich Whitman studies for years to come.”---Kenneth M. Price, coeditor, Walt Whitman Hpertext Archive

“In his previous work Gary Schmidgall has already played a key role in the scholarly assessment of Traubel's importance as a promoter of Whitman's fame, an oral historian, a literary executor, and, in all, a subtle interpreter of the poet's life and works. With this new selection from the Conservator, we gain further insights into Traubel as a literary journalist, social critic, and pioneer in sexual liberation. The introduction and editing are done with the scholarly care, engaging style, and personal touch we have come to expect from Schmidgall. Whitman scholarship is deeply enriched by this project.”---M. Jimmie Killingsworth, Texas A&M University