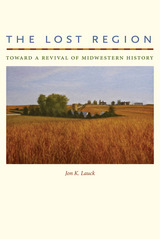 The American Midwest is an orphan among regions. In comparison to the South, the far West, and New England, its history has been sadly neglected. To spark more attention to their region, midwestern historians will need to explain the Midwest’s crucial roles in the development of the entire country: it helped spark the American Revolution and stabilized the young American republic by strengthening its economy and endowing it with an agricultural heartland; it played a critical role in the Union victory in the Civil War; it extended the republican institutions created by the American founders, and then its settler populism made those institutions more democratic; it weakened and decentered the cultural dominance of the urban East; and its bustling land markets deepened Americans’ embrace of capitalist institutions and attitudes.
In addition to outlining the centrality of the Midwest to crucial moments in American history, Jon K. Lauck resurrects the long-forgotten stories of the institutions founded by an earlier generation of midwestern historians, from state historical societies to the Mississippi Valley Historical Association. Their strong commitment to local and regional communities rooted their work in place and gave it an audience outside the academy. He also explores the works of these scholars, showing that they researched a broad range of themes and topics, often pioneering fields that remain vital today.
The Lost Region demonstrates the importance of the Midwest, the depth of historical work once written about the region, the continuing insights that can be gleaned from this body of knowledge, and the lessons that can be learned from some of its prominent historians, all with the intent of once again finding the forgotten center of the nation and developing a robust historiography of the Midwest.

Attorney, historian, and senior advisor and counsel to South Dakota Senator John Thune, Jon K. Lauck is the author of three previous books on midwestern political and economic history and the coauthor and coeditor of a collection of essays on South Dakota’s political culture. His prize-winning articles and reviews have been published widely. Lauck lives in Sioux Falls, South Dakota, with his wife Amy and three children, Brendtly, Abigail, and Henry.