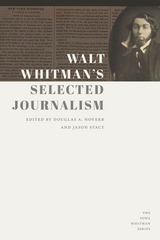 Long before he was a celebrated poet, Walt Whitman was a working journalist. By the time he published the first edition of Leaves of Grass in 1855, Whitman had edited three newspapers and published thousands of reviews, editorials, and human-interest stories in newspapers in and around New York City. Yet for decades, much of his journalism has been difficult to access or even find. For the first time, Walt Whitman’s Selected Journalism thematically and chronologically organizes a compelling selection of Whitman’s journalism from the late 1830s to the Civil War. It includes writings from the poet’s first immersion into the burgeoning democratic culture of antebellum America to the war that transformed both the poet and the nation.

Walt Whitman’s Selected Journalism covers Whitman’s early years as a part-time editorialist and ambivalent schoolteacher between 1838 and 1841. After 1841, it follows his work as a dedicated full-time newspaperman and editor, most prominently at the New York Aurora and the Brooklyn Daily Eagle between 1842 and 1848. After 1848 and up to the Civil War, Whitman’s journalism shows his slow transformation from daily newspaper editor to poet. This volume gathers journalism from throughout these early years in his career, focusing on reporting, reviews, and editorials on politics and democratic culture, the arts, and the social debates of his day. It also includes some of Whitman’s best early reportage, in the form of the short, personal pieces he wrote that aimed to give his readers a sense of immediacy of experience as he guided them through various aspects of daily life in America’s largest metropolis.

Over time, journalism’s limitations pushed Whitman to seek another medium to capture and describe the world and the experience of America with words. In this light, today’s readers of Whitman are doubly indebted to his career in journalism. In presenting Whitman-the-journalist in his own words here, and with useful context and annotations by renowned scholars, Walt Whitman’s Selected Journalism illuminates for readers the future poet’s earliest attempts to speak on behalf of and to the entire American republic.
AUTHOR BIOGRAPHY
Douglas A. Noverr is a professor emeritus in the department of Writing, Rhetoric, and American Cultures and the American Studies graduate program at Michigan State University. He is currently the coordinator at international conferences for the Popular Culture and American Culture Association. His research and publications span the fields of sports history and culture, film history, popular culture, and American literature. He is the author of Michigan State University: The Rise at a Research University and the New Millennium, 1970–2005 and the coeditor of The Complete Journalism of Walt Whitman, volumes I and II. He lives in East Lansing, Michigan.

Jason Stacy is an associate professor of United States history at Southern Illinois University Edwardsville. He is the author of Walt Whitman’s Multitudes: Labor Reform and Persona in Whitman’s Journalism and the First Leaves of Grass, 1840–1855 and editor of Leaves of Grass, 1860: the 150th Anniversary Facsimile Edition. He lives in Edwardsville, Illinois.
TABLE OF CONTENTS
Contents
Acknowledgments
Introduction: Walt Whitman’s Journalism Career in New York and Brooklyn (Douglas A. Noverr and Jason Stacy)
I. Democracy and Politics
Americanism
Organs of the Democracy
Intelligence of the Working People
Texas
All Reforms in Government Must Come from the Democratic Impulse!
Democratic Young Men.
Shall we fight it out?
No Slavery in Oregon.
General Taylor.
The Queen of England.
The UNION Now and Forever!
Loss of the Wilmot Proviso.
Rights of Southern Freemen As Well As Northern Freemen—Mr. Calhoun’s Speech.
Some Thoughts about This Matter of the Washington Monument.
Letter from Gen. Cass.
Henry C. Murphy
“The Dead Rabbit Democracy”
Prohibition of Colored Persons.
About China, as Relates to Itself and to Us.
Untitled [August 26, 1858]
Untitled [March 7, 1859]
II. Moral Suasion
Dickens and Democracy
A Dialogue By Walter Whitman
The Wrongs of Woman.
Slavers—and the Slave Trade.
Legislating for Morality.
Is it right to dance?
Hurrah for Choking Human Lives!
Radicalism at the West.
Brooklyn Schools.
Brooklyn Morals.—Those Wax Figures.
Long Island.—The English and the Dutch.
Public Annoyances and Municipal Negligence.
“The worth of liberty.”
Scenes in a Police Justice’s Court Room.
Why Should Church Property Be Exempt from Taxation?
Little Hope Left!
The Cable Laid!
The Two Worlds United.
The Moral Effect of the Atlantic Cable
III. The Arts
Mr. Emerson’s Lecture
Untitled [March 8, 1842]
Italian Opera in New Orleans
The Hutchinson Family
American Music, New and True!
Heart-Music and Art-Music
Art-Singing and Heart-Singing
How Literature Is Paid Here
New Publications.
Polishing the “Common People.”
Music for the “natural ear.”
Government patronage of men of letters.
Literary News, Notices, &c., Works of Art, &c.
Dramatics; and the true secret of Acting.
Miserable State of the State.—Why Can’t We Have Something Worth the Name of American Drama?
Honor to Literature!
Something About Art and Brooklyn Artists—A correspondent furnishes us with the following
Arts and Artists: Remarks of Walt Whitman, Before the Brooklyn Art Union, on the Evening of March 31, 18511
Walt Whitman a Brooklyn Boy. Leaves of Grass: (A Volume of Poems Just Published.)
IV. Come Closer to Me
Greenwood Cemetery
For the Hempstead Inquirer, Sun-Down Papers.—[No. 1] From the Desk of a Schoolmaster
Sun-Down Papers.—[No. 7] From the Desk of a Schoolmaster
Sun-Down Papers.—[No. 8] From the Desk of a Schoolmaster
Sun-Down Papers.—[No. 9] From the Desk of a Schoolmaster
For the Long Island Farmer, Sun-Down Papers.—[No. 10] From the Desk of a Schoolmaster
Life in New York
Life in a New York Market
An Hour in a Balcony
A Peep at the Israelites
Untitled [April 6, 1842]
Life and Love
The Ocean
Dreams
An Hour at a Bath
A Visit to Greenwood Cemetery
Ourselves and the ‘Eagle.’
Gayety of Americans
PHILOSOPHY OF FERRIES.
East Long Island Correspondence [Letter III].
Excerpts from a Traveller’s Note Book—[No. 3] Western Steamboats—The Ohio
Letters from a Travelling Bachelor [No. III]
From a Travelling Bachelor [Number IX]
From a Travelling Bachelor [Number X]
Letters from Paumanok [No. 2]
Long Island is a Great Place!
A Gossipy August Article.
Letter From Washington: Our National City, After all, Has Some Big Points of Its Own—Its Suggestiveness To-day—The Figure of Liberty Over the Capitol— Scenes, Both Fixed and Panoramic—A Thought on Our Future Capital.
WASHINGTON.; The Last Hours of Congress—Washington Crowds, and the President. From an Occasional Correspondent. WASHINGTON, Monday, March 6, 1865.
Index
REQUEST ACCESSIBLE FILE