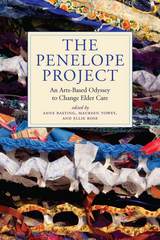 Of the 15,000 nursing homes in the United States, how many are places you’d want to visit, much less live in? Now that people are living longer and more of the population are elderly, this question is more important than ever, particularly for people with disabilities. We must transform long-term care into an experience we and our loved ones can face without dread. It can be done. The Penelope Project shows how by taking readers on an ambitious journey to create a long-term care community that engages its residents in challenging, meaningful art-making.

At Milwaukee’s Luther Manor, a team of artists from the University of Wisconsin’s theatre department and Sojourn Theatre Company, university students, staff, residents, and volunteers traded their bingo cards for copies of The Odyssey. They embarked on a two-year project to examine this ancient story from the perspective of the hero who never left home: Penelope, wife of Odysseus. Together, the team staged a play that engaged everyone and transcended the limits not just of old age and disability but also youth, institutional regulations, and disciplinary boundaries.

Inviting readers to see through the eyes of residents, students, artists, staff, family members, and experts in the fields of education, long-term care, and civically engaged arts practice, this book underscores the essential role of the arts and humanities in living richly. Waiting, as Penelope waited, need not be a time of loss and neglect. The Penelope Project boldly dreams of how to make late life a time of growth and learning. If you dream of improving people’s lives through creative endeavors, this book provides practical advice.
AUTHOR BIOGRAPHY
Founder and president of TimeSlips Creative Storytelling, Inc., Anne Basting is professor of theatre at the University of Wisconsin, Milwaukee, and coordinator of the Creative Trust. She lives in Milwaukee, Wisconsin.

Maureen Toweywas creative director for Arcade Fire on its Grammy award-winning album The Suburbs and directed tours for Ray LaMontagne, Esperanza Spalding, and tUnE-yArDs. She lives in New York City.