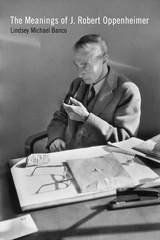 He called the first atomic bomb “technically sweet,” yet as he watched its brilliant light explode over the New Mexico desert in 1945 in advance of the black horrors of Hiroshima and Nagasaki, he also thought of the line from the Hindu epic The Bhagavad Gita: “I am become Death, the destroyer of worlds.” Physicist J. Robert Oppenheimer, the scientific director of the Manhattan Project, the single most recognizable face of the atomic bomb, and a man whose name has become almost synonymous with Cold War American nuclear science, was and still is a conflicted, controversial figure who has come to represent an equally ambivalent technology.

The Meanings of J. Robert Oppenheimer examines how he has been represented over the past seven decades in biographies, histories, fiction, comics, photographs, film, television, documentaries, theater, and museums. Lindsey Michael Banco gathers an unprecedented group of cultural texts and seeks to understand the multiple meanings Oppenheimer has held in American popular culture since 1945. He traces the ways these representations of Oppenheimer have influenced public understanding of the atomic bomb, technology, physics, the figure of the scientist, the role of science in war, and even what it means to pursue knowledge of the world around us. Questioning and unpacking both how and why Oppenheimer is depicted as he is across time and genre, this book is broad in scope, profound in detail, and offers unique insights into the rise of nuclear culture and how we think about the relationship between history, imagination, science, and nuclear weapons today.
AUTHOR BIOGRAPHY
Lindsey Michael Banco is an associate professor of English at the University of Saskatchewan. He is the author of Travel and Drugs in Twentieth-Century Literature. He lives in Saskatoon, Saskatchewan.
TABLE OF CONTENTS
Contents
Acknowledgments
Introduction
Part I. Reading Oppenheimer
Chapter 1. Desert Saint or Destroyer of Worlds: Oppenheimer Biographies
Chapter 2. Under the Sun: Oppenheimer in History
Chapter 3. History Imagined: Oppenheimer in Fiction
Part II. Visualizing Oppenheimer
Chapter 4. The Ghost and the Machine: Oppenheimer in Film and Television
Chapter 5. “The Bony Truth”: Oppenheimer in Museums
Part III. Knowing Oppenheimer
Chapter 6. In His Own Words: Oppenheimer’s Writing
Conclusion
Notes
Bibliography
Index
REQUEST ACCESSIBLE FILE