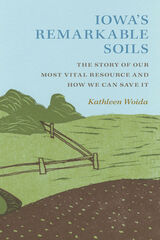 Sometimes called “black gold,” Iowa’s deep, rich soils are a treasure that formed over thousands of years under the very best of the world’s grasslands—the tallgrass prairie. The soils are diverse and complex and hold within them a record not only of Iowa’s prehistoric past, but also of the changes that took place after settlers utterly transformed the land, as well as the ongoing adjustments taking place today due to climate change. In language that is scientifically sound but accessible to the layperson, Kathleen Woida explains how soils formed and have changed over centuries and millennia in the land between two rivers.

Its soils are what make Iowa a premier agricultural state, both in terms of acres planted and bushels harvested. But in the last hundred years, large-scale intensive agriculture and urban development have severely degraded most of our soils. However, as Woida documents, some innovative Iowans are beginning to repair and regenerate their soils by treating them as the living ecosystem and vast carbon store that they are. To paraphrase Aldo Leopold, these new pioneers are beginning to see their soils as part of a community to which they and their descendants belong, rather than commodities belonging to them.
AUTHOR BIOGRAPHY
Kathleen Woida worked as a geologist in Iowa for twenty years with the Natural Resources Conservation Service. She is currently an adjunct associate professor in the University of Iowa’s Department of Earth and Environmental Sciences. Woida lives in Des Moines, Iowa.
TABLE OF CONTENTS
Contents
Acknowledgments
Preface
Introduction
Part One. The Inheritance: Fertile Black Gold
One. Profiles of the Underground
Two. Wealth in Diversity
Three. The Stories They Can Tell
Four. Soils on Iowa’s Hidden Landscapes
Part Two. The Sixth Factor: People, Agriculture, and Soils
Five. Reaping the Bounty
Six. Squandering the Inheritance
Seven. Rediscovering the Living Soil
Eight. Stories from the Field
Nine. Soils, Climate Change, and the Future
Glossary
Bibliography
Index
REQUEST ACCESSIBLE FILE