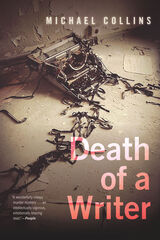 For Robert Pendleton, a professor clinging to tenure and living in the shambles of his once-bright literary career, death seems to be the only remaining option. But his suicide attempt fails, halted at the last moment by the intervention of Adi Wiltshire, a graduate student battling her own demons of failure and thwarted ambition. During Pendleton's long convalescence, Adi discovers a novel hidden in his basement: a brilliant, semi-autobiographical story with a gruesome child-murder at its core.

The publication of Scream causes a storm of publicity: a whirlwind into which Adi, Horowitz and the still-incapacitated Pendleton are thrust. The novel is treated as an existential masterpiece and looks set to bring its author the success he's always sought – when, ironically, he is no longer in a condition to appreciate it – until questions begin to be asked about its content: in particular about the uncanny resemblance between Pendleton's fictional crime and a real-life, unresolved local murder. Enter Jon Ryder, a world-weary detective who could have walked off the pages of a police thriller, and the hunt for the murderer is on.
AUTHOR BIOGRAPHY
Michael Collins was born in Limerick, Ireland, and is a world-class distance runner. He won the North and South Pole Marathon and Everest Marathon, and would go on to win a bronze medal at the World Championships in the 100k. His work has been shortlisted for the Booker Prize, won the Kerry Ingredients Book of the Year Award, awarded a Pushcart Prize, and has been translated into several languages. Collins lives in South Bend, Indiana.