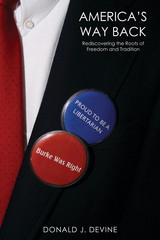 Devine, a longtime adviser to Ronald Reagan, lays out a powerful case for the philosophical synthesis of freedom and tradition that Reagan said was the essence of modern conservatism. The secret of America’s success, he shows, has been the Constitution’s capacity to harmonize the twin ideals of freedom and tradition. But today, progressivism has so corrupted modern political thinking—in both parties—that leaders keep calling for the same failed tactics: more money poured into more big-government programs.

In America’s Way Back, Devine not only reveals where things went wrong, and why, but also points the way to reclaiming America’s freedom, prosperity, and creativity. The solution lies in a new “fusion” of traditional and libertarian thought.

Devine debunks the common view that marrying the two is nothing more than political calculation. He shows that without a deep philosophical commitment to harmonizing freedom and tradition, neither of these ideals can long survive.

In making the case for twenty-first-century fusionism, America’s Way Back updates the insights of Frank Meyer, the theorist Reagan specifically credited with “fashioning a vigorous synthesis of traditional and libertarian thought.“ Devine shows that, just as the fusionism of Meyer and William F. Buckley Jr. led to the conservative revival in the 1960s, a new harmony between freedom and tradition will revive America today.

“Prepare for enlightenment. . . . The [story] that Mr. Devine narrates aptly, informatively, is engaging as a summons to look around, look back, ask the vital question: Are conservatives doing the very, very best they can?” —Washington Times

“Intellectual yet highly readable . . . Devine has plenty of such instructive analysis and anecdotes to bolster his points. . . . You will learn about concepts your university should have introduced to you, only now via Devine’s graceful writing, incisive analysis, instructive anecdotes, and a plan to restore America’s greatness.” —Human Events

“The timing is right for [Devine’s] new book America’s Way Back. It lays out the course for a conservative intellectual renewal, to renew the nation by renewing her best traditions. . . . Reagan had a heckuva lieutenant in Don Devine. It is good to see him now mentoring the next generation of conservative leaders.” —L. Brent Bozell III, syndicated columnist, president of the Media Research Center

“A tour-de-force critique . . . We need to listen to people like Devine who are calling us back to a simpler, less complicated system of governance that allows decisions to be made at the local and state levels. If we don’t listen, if we just doggedly insist that the solution is to re-order, reform and re-imagine our failed programs, then we’ll end up going the way of the Titanic.” —Floyd Brown, Capitol Hill Daily

“A brilliant analysis of the major factors that have contributed to our nation’s decline. A very timely effort on perhaps the most critical issue of our time.” —George W. Carey, professor of government, Georgetown University

“A marvelous book. Read America’s Way Back if you fear ignorance and celebrate righteous, moral, intellectual knowledge.” —Craig Shirley, author of Rendezvous with Destiny: Ronald Reagan and the Campaign That Changed America

Donald J. Devine is a senior scholar at the Fund for American Studies and the author of seven other books. A longtime adviser to Ronald Reagan, he served as head of the federal civil service during Reagan’s first term, saving $6 billion in taxpayer money and reducing more than 100,000 nondefense bureaucratic slots. For nearly a quarter century he was a professor of government, politics, and Western civilization, teaching at the University of Maryland and Bellevue University. He and his wife, Ann, live in Shady Side, Maryland.