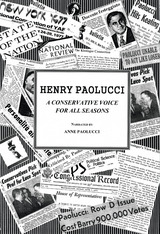 Praise for Henry Paolucci: A Conservative Voice for All Seasons

“During the Conservative Party’s formative years, Henry Paolucci combined tac­tical advice with an uncompromising adherence to principle. He was a powerful orator, and his special blend of populist conservatism contributed to his party’s extraordinary inroads among traditional Democrats. This book adds to our knowl­edge of a third party that has had a profound impact on the Empire State’s politics.”
—James L. Buckley, former U.S. senator

“Before there was U.S. Senator James Buckley, there was New York City mayoral candidate William F. Buckley Jr., and before there was Bill Buckley, there was Henry Paolucci, 1964 senatorial candidate of the Conservative Party of New York State, whose unflinching stand for the right ideas and policies confounded liberals and inspired conservatives. Anne Paolucci’s clear-eyed portrait of her late husband is filled with lessons for today.”
—Lee Edwards, author of William F. Buckley Jr.: The Maker of a Movement

“An important account of the stellar role Professor Henry Paolucci played within the Conservative Party in its formative stages. . . . We owe a great debt of gratitude to Anne Paolucci for this excellent review of her husband’s life as a conservative thinker, scholar, and leader.”
—Serphin R. Maltese, former chairman of the New York State Conservative Party, former New York state senator

“When I was privileged to run for governor on the Conservative line, I used Henry Paolucci’s campaign as my guidepost. With this fiftieth-anniversary celebration, it would be wise for Conservative leaders to recall Henry’s contributions and to employ them as a standard for the party and for the nation as a whole.”
—Herbert London, president emeritus of Hudson Institute

“Fascinating. Anne Paolucci provides an important overview of the many contri­butions her husband made to the conservative cause in America.”
—Wayne Thorburn, author of A Generation Awakes: Young Americans for Freedom and the Creation of the Conservative Movement