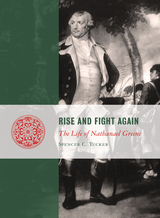 Next only to Continental army commander General George Washington, Nathanael Greene was the most important American general of the War for Independence. Self-taught but extraordinarily capable, Greene won few battles. But his campaign that won the South for the revolutionary cause was the most brilliant and daring of the entire war.

In Rise and Fight Again, award-winning military historian Spencer Tucker tells the story of Greene’s rise from relative obscurity to military prominence at the tender age of thirty-two. He reveals Greene to have been a strict disciplinarian who insisted on rigorous training but was also deeply concerned for the welfare of his men. Tucker also shows that Greene was by nature a problem-solver who recognized talent and knew how to harness it effectively. Indeed, although Greene was the youngest general in his army, Washington assigned him the herculean task of serving as its quartermaster general. Greene proved so effective in this demanding assignment that in October 1780 he was given command of the Southern Department. Taking charge of a sharply depleted, dispirited force lacking all manner of military equipment and even clothing, Greene refused to be drawn into pitched battles save on favorable terms. He rebuilt the Southern army in less than a year and adopted daring tactics that defied conventional military wisdom but recaptured from British control most of the Carolinas and Georgia.

Greene has rarely been accorded his earned place in the history of the American founding, in part because of his early death in 1786, when he was just forty-three. But with Tucker’s brief but masterful biography, Greene finally gets his due.

Spencer C. Tucker is an acclaimed military historian who has received the Theodore Roosevelt and Franklin Roosevelt awards for best book in naval history, three Society of Military History awards for best reference work, and two John Leyman awards from the North American Society of Oceanic History. He taught for thirty years at Texas Christian ­University before holding the John Biggs Chair in Military History at the Virginia Military Institute.