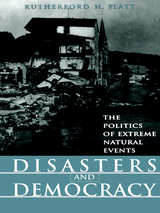 In recent years, the number of presidential declarations of “major disasters” has skyrocketed. Such declarations make stricken areas eligible for federal emergency relief funds that greatly reduce their costs. But is federalizing the costs of disasters helping to lighten the overall burden of disasters or is it making matters worse? Does it remove incentives for individuals and local communities to take measures to protect themselves? Are people more likely to invest in property in hazardous locations in the belief that, if worse comes to worst, the federal government will bail them out?.Disasters and Democracy addresses the political response to natural disasters, focusing specifically on the changing role of the federal government from distant observer to immediate responder and principal financier of disaster costs.
AUTHOR BIOGRAPHY
Rutherford H. Platt is professor of geography and planning law at the University of Massachusetts, Amherst, and a member of the Illinois Bar. He is author of Land Use and Society (Island Press, 1996) and The Ecological City (University of Massachusetts Press, 1994).
REVIEWS
"Disasters and Democracy is more than a fascinating read; it will open the public's eyes to the real problems and costs associated with disaster relief."
— Electronic Green Journal

"A most valuable feature of this book is the conclusions and recommendations, where Platt outlines the policy lessons derived from case studies. These lessons…are common sense, politically feasible, easy-to-implement changes to existing policies that, in many cases, are long overdue."
— Environmental Hazards

"This book takes on more importance with each passing day…. Anyone with an interest in the area of disaster policy must have this book on his/her shelf."
— Journal of Contingencies and Crisis Management