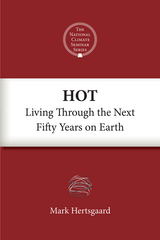 Hot: Living Through the Next Fifty Years on Earth
by Mark Hertsgaard
edited by Eban Goodstein
Island Press, 2013
eISBN: 978-1-61091-414-7
On December 7, 2011, Mark Hertsgaard participated in The National Climate Seminar, a series of webinars sponsored by Bard College’s Center for Environmental Policy. The online seminars provide a forum for leading scientists, writers, and other experts to talk about critical issues regarding climate change. The series also opens a public conversation, inviting participants to ask questions and contribute their own thoughts.

Hertsgaard has spent the last two decades reporting on climate change for media outlets including The New Yorker, NPR, Time, Vanity Fair, and The Nation, where he is the environment correspondent. His lecture focused on political movements and how environmental advocates can provoke change in public attitudes and on Capitol Hill. Hertsgaard sees 2011’s Occupy movement as a sign of real hope and discussed what climate activists can learn from Occupy’s tactics.

This E-ssential is an edited version of Hertsgaard’s talk and the subsequent question and answer session. While some material has been cut and some language modified for clarity, the intention was to retain the substance of the original discussion.
AUTHOR BIOGRAPHY
Mark Hertsgaard has spent the last two decades reporting on climate change for media outlets including The New Yorker, NPR, Time, Vanity Fair, and The Nation, where he is the environment correspondent. But the full truth did not hit home until he became a father and, soon thereafter, learned that climate change had already arrived―a century earlier than forecast―with impacts bound to worsen for decades to come. Hertsgaard’s daughter Chiara, now five years old, is part of what he has dubbed “Generation Hot”: the two billion young people worldwide who will spend the rest of their lives coping with mounting climate disruption.

His new book Hot is a father’s cry against climate change, but most of the book focuses on solutions, offering a deeply reported blueprint for how all of us―as parents, communities, companies and countries―can navigate this unavoidable new era.

Called “one of America’s finest reporters” by Barbara Ehrenreich, Hertsgaard is the author of five previous books that have been translated into sixteen languages, including On Bended Knee: The Press and the Reagan Presidency and Earth Odyssey: Around the World In Search of Our Environmental Future.
REQUEST ACCESSIBLE FILE