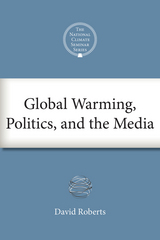 Global Warming, Politics, and the Media
by David Roberts
edited by Eban Goodstein
Island Press, 2013
eISBN: 978-1-61091-417-8
On September 21, 2011, David Roberts participated in The National Climate Seminar, a series of webinars sponsored by Bard College’s Center for Environmental Policy. The online seminars provide a forum for leading scientists, writers, and other experts to talk about critical issues regarding climate change. The series also opens a public conversation, inviting participants to ask questions and contribute their own thoughts.

Roberts is a Senior Staff Writer at Grist, one of the web’s most popular sites for environmental news and commentary, so he is distinctively qualified to discuss the relationship between global warming, politics, and the media. In his lecture, Roberts argued that environmentalists’ traditional criticism of climate change coverage—namely that journalists describe global warming as a debatable theory rather than as fact—is no longer the issue. Most media accept the reality of climate change—but it is treated as a specialty issue, rather than as a phenomenon that affects myriad aspects of life. The seminar focused on how to change that perception—how to make climate a backdrop to the political debates that affect real change.

This E-ssential is an edited version of Roberts’ talk and the subsequent question and answer session. While some material has been cut and some language modified for clarity, the intention was to retain the substance of the original discussion.
AUTHOR BIOGRAPHY
David Roberts is a Senior Staff Writer for Grist Magazine, an online environmental publication based in Seattle, Washington. Born and raised in Tennessee, he pursued a graduate degree in philosophy at the University of Montana before leaving academia for the Seattle tech industry in 1999. After several years working for such companies as Amazon.com, IMDB.com, and Microsoft, Roberts was hired by Grist Magazine in December 2003. He lives in the Seattle area with his wife and two sons.
REQUEST ACCESSIBLE FILE