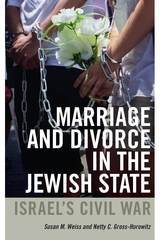 Israel currently has two recognized systems of law operating side by side: civil and religious. Israeli religious courts possess the exclusive right to conduct and terminate marriages. There is no civil marriage or divorce in Israel, irrespective of one’s religious inclinations. All Muslims must marry and divorce in accordance with shariya laws, all Catholics in accordance with canon law, and all Jews in accordance with Torah law (halakha). The interpretation and implementation of Torah law is in the hands of the Orthodox religious establishment, the only stream of Judaism that enjoys legal recognition in Israel. The rabbinic courts strenuously oppose any changes to this so-called status quo arrangement between religious and secular authorities. In fact, religious courts in Israel are currently pressing for expanded jurisdiction beyond personal status, stressing their importance to Israel’s growing religious community. This book shows how religious courts, based on centuries-old patriarchal law, undermine the full civil and human rights of Jewish women in Israel. Making a broad argument for civil marriage and divorce in Israel, the authors also emphasize that religious marriages and divorces, when they do occur, must benefit from legislation that makes divorce easier to obtain. Making this issue their focal point, they speak to a larger question: Is Israel a democracy or a theocracy?
AUTHOR BIOGRAPHY
SUSAN M. WEISS is a matrimonial lawyer, NGO founder, and activist. NETTY C. GROSS-HOROWITZ is a senior writer at the Jerusalem Report.
TABLE OF CONTENTS


Acknowledgments • Prologue: Who Are We? • Introduction • The Clueless Agunah • The Scarlet Agunah • The Ping-Pong Agunah • The Accidental Agunah • The Agunah Pawn • The Reluctant Agunah • Human Rights Violations in Israeli Rabbinic Courts • Bibliography •Index