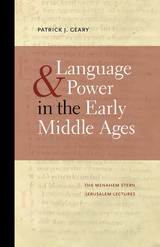 The eminent historian Patrick J. Geary has written a provocative book, based on lectures delivered at the Historical Society of Israel about the role of language and ideology in the study and history of the early Middle Ages. He includes a fascinating discussion of the rush by nationalist philologists to rediscover the medieval roots of their respective vernaculars, the rivalry between vernacular languages and Latin to act as transmitters of Christian sacred texts and administrative documents, and the rather sloppy and ad hoc emergence in different places of the vernacular as the local administrative idiom. This is a fascinating look at the weakness of language as a force for unity: ideology, church authority, and emerging secular power always trumped language.
AUTHOR BIOGRAPHY
PATRICK J. GEARY is the Distinguished Emeritus Professor of Medieval History at UCLA and currently professor of medieval history at the Institute for Advanced Study, Princeton, N.J.
TABLE OF CONTENTS