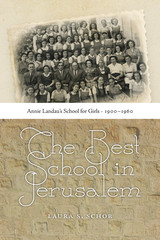 Annie Edith (Hannah Judith) Landau (1873–1945), born in London to immigrant parents and educated as a teacher, moved to Jerusalem in 1899 to teach English at the Anglo-Jewish Association’s Evelina de Rothschild School for Girls. A year later she became its principal, a post she held for forty-five years. As a member of Jerusalem’s educated elite, Landau had considerable influence on the city’s cultural and social life, often hosting parties that included British Mandatory officials, Jewish dignitaries, Arab leaders, and important visitors. Her school, which provided girls of different backgrounds with both a Jewish and a secular education, was immensely popular and often had to reject candidates, for lack of space. A biography of both an extraordinary woman and a thriving institution, this book offers a lens through which to view the struggles of the nascent Zionist movement, World War I, poverty and unemployment in the Yishuv, and the relations between the religious and secular sectors and between Arabs and Jews, as well as Landau’s own dual loyalties to the British and to the evolving Jewish community.
AUTHOR BIOGRAPHY
LAURA S. SCHOR is professor of history at Hunter College and the CUNY Graduate School. She is the author of several books, including The Life and Legacy of the Baroness Betty de Rothschild.
TABLE OF CONTENTS