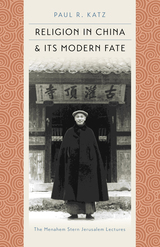 Paul R. Katz has composed a fascinating account of the fate of Chinese religions during the modern era by assessing mutations of communal religious life, innovative forms of religious publishing, and the religious practices of modern Chinese elites traditionally considered models of secular modernity. The author offers a rare look at the monumental changes that have affected modern Chinese religions, from the first all-out assault on them during the 1898 reforms to the eve of the Communist takeover of the mainland. Tracing the ways in which the vast religious resources (texts, expertise, symbolic capital, material wealth, etc.) that circulated throughout Chinese society during the late imperial period were reconfigured during this later era, Katz sheds new light on modern Chinese religious life and the understudied nexus between religion and modern political culture. Religion in China and Its Modern Fate will appeal to a broad audience of religionists and historians of modern China.
AUTHOR BIOGRAPHY
PAUL R. KATZ is a research fellow at the Institute of Modern History, Academia Sinica, Taiwan.
TABLE OF CONTENTS