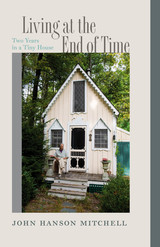 In this second book in his Scratch Flat Chronicles, John Hanson Mitchell tells how he set out to recreate Henry David Thoreau’s two years at Walden Pond in a replica of Thoreau’s cabin. Mitchell lived off the grid, without running water or electricity, in a tiny house not half a mile from a major highway and in the shadow of a massive new computer company. Nevertheless, his contact with wildlife, the changing seasons, and the natural world equaled and even surpassed Thoreau’s. Hugely popular with the international community of Thoreau followers when it was first published, this book will now be essential reading for the growing community of people who are interested in living in a tiny house, fully experiencing the natural world, or finding self-sufficiency in an increasingly plugged-in society.
AUTHOR BIOGRAPHY
JOHN HANSON MITCHELL is the author of five books based on the single square mile known as Scratch Flat, as well as two travel books and the biography of the early African American photographer Robert A. Gilbert. A winner of the John Burroughs Award for his nature essays, he is also editor of Sanctuary magazine, published by the Massachusetts Audubon Society.
TABLE OF CONTENTS